What’s in it for me?

The effects of global warming are visible all over the world, but not all evidently so. For example, the rise in global mean land-ocean surface temperature has been 0.6 degrees Celsius since 1980. But no one experiences the global average temperature directly -it is after all the average over a wide range of temperatures from cold Siberia to the Sahara desert, so in terms of personal experience this fact is meaningless.

One needs to know the context in order to understand what this means. This context is provided by facts such as that this change is roughly twice the global mean temperature change between 1880-1980, that the uncertainty estimate for recent data is 0.1 deg, that temperature reconstructions reveal the current temperature to be unprecedented over at least 1800 years, etc.

There already have been colossal changes and events in recent years with a clear and obvious impact. There is the incredible drop in arctic ice volume (11,000 cubic km since 1980, with only 4,000 cubic km left on average in sept. 2010, again context is needed). Or the recent flood in Pakistan that affected an area at least the size of England. And other floods, like the flash floods in North-West China (resulting in over a thousand deaths) or the big flood in Australia (which affected 200,000 people). But the link between events like floods and heat waves and global warming is a tricky one, just like the link between smoking and lung cancer in an individual patient: the increase in their occurrence is a solid prediction in a statistical sense, but the story for each individual case is complex. Last year’s heat wave in Russia is a case in point, and may to a large extent be attributable to a `normal’ weather extreme [update Mar 14, 2011: or global warming after all? See here for a compelling argument]. Besides, all this still doesn’t directly touch upon the lives of people here in America -who typically haven’t visited the Arctic recently, let alone twice and know in their hearts that countries like Pakistan don’t really exist. Even the rising global food prices, caused mainly by weather calamities and stirring up mass protests and revolt in the Arab world, such as the revolution in Egypt, have little impact in the U.S. as Americans spend a relatively small fraction of their income on food. Only when global warming and weather start to impact the rental prices here in New York I’m going to be seriously screwed.

All this raises a question: what will we experience locally from the global climate change? The simple rule of thumb answer -expect more extreme weather events as the temperature erratically becomes higher and higher- is just that, a rule of thumb. It tells us that the U.S. snowstorms last winter are consistent with and expected from global warming, but the more local you look, to more complicated everything becomes. A very useful resource is the report Global Climate Change Impacts in the United States by the United States Global Change Research Program, available here. 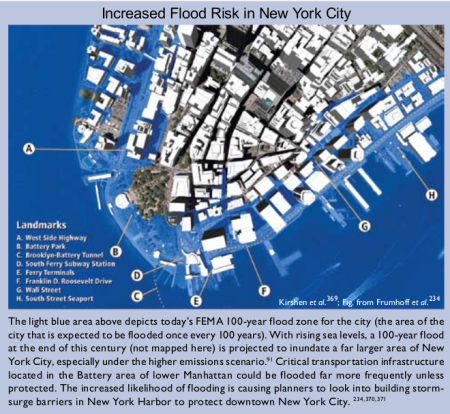 When it comes to New York (or the North East coast in general), it tells us the following. First, the past:

Since 1970, the annual average temperature in the Northeast has increased by 2°F [=1.1 deg. Celsius], with winter temperatures rising twice this much. Warming has resulted in many other climate-related changes, including:

Over the next several decades, temperatures in the Northeast are projected to rise an additional 2.5 to 4°F in winter and 1.5 to 3.5°F in summer. By mid-century and beyond, however, today’s emissions choices would generate starkly different climate futures; the lower the emissions, the smaller the climatic changes and resulting impacts. By late this century, under a higher emissions scenario:

So, what’s in it for me? (sang the N.Y. Indie band the Walkmen in 2004). The bottom line, if you’re planning on doing business or living in NY, you’d better start paying attention:

The densely populated coasts of the Northeast face substantial increases in the extent and frequency of storm surge, coastal flooding, erosion, property damage, and loss of wetlands. New York state alone has more than $2.3 trillion in insured coastal property. Much of this coastline is exceptionally vulnerable to sea-level rise and related impacts. Some major insurers have withdrawn coverage from thousands of homeowners in coastal areas of the Northeast, including New York City.

This entry was posted on Saturday, March 12th, 2011 at 1:47 pm and is filed under Climate, New York, Science. You can follow any responses to this entry through the RSS 2.0 feed. You can leave a response, or trackback from your own site.